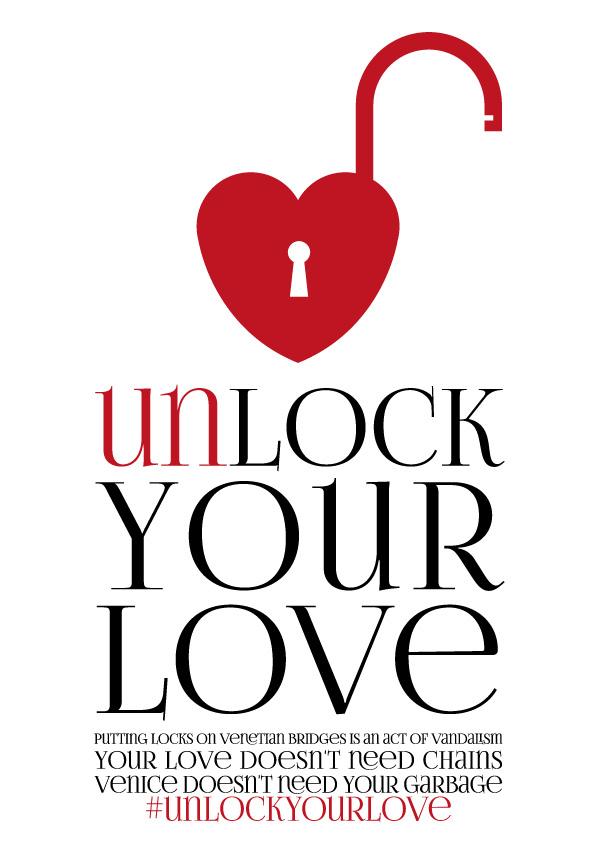 A SPONTANEOUS ACTION OF VENETIANS
THE FIGHT AGAINST “LOCKS OF LOVE”

Unlocking the love from every chain, every lock, every rusty and stale claim making a stereotypical and unimaginative gesture to symbolize the beautiful and delicate union between two people. Liberating Venice from tons of junk which – having depressingly lost their symbolic significance – leave a legacy of dirt, problems and the opposite image of beauty for the city.
With “UNLOCK YOUR LOVE”, beginning today until next Sunday, hundreds, perhaps thousands of Venetians, residents, and lovers of the city will affix in “sensitive”, vulnerable places, a notice in multiple languages depicting an open, heart-shaped padlock with an explanation that attaching the locks is against the love and leaves an undeserved legacy which weighs on the city.
They will go to school, to work, to the grocery store or to have a drink with friends. They will discourage visitors “in the moment”, but also let the world know that there are small, seemingly insignificant actions which are offensive to the history of a place and the people who live there. They will do this in the “greenest” way possible by limiting the use of adhesive tape, and using biodegradable materials such as paper and simple wire where appropriate, to minimize dirt and environmental pollution.
In this “estate horribilis”, Venice has seen it all: cars and bikes in the narrow calli, naked bathers in the canale, sun-bathers in the campi and along the fondamente, shitting and peeing, in open-air and in broad daylight in the most iconic places, dozens of children left by their parents to play in unclean water when the tides come up in Piazza San Marco … the result is a spontaneous initiative of “active resistance”.
For some years, several groups (with an uncommon civic sense and self-sacrifice) have been operating in the city in an attempt to remove the “love” padlocks from bridges, shutters, and any other places the sick imaginations of tourists can devise. They do it because, it must be said, there is a hesitation on the part of various authorities and institutions to act upon this task which should be delegated to them. However, we believe the time has come to send a clear and unambiguous message (along with removal of padlocks) to all those people who arrive in Venice with a somewhat distorted idea of love, whether for a partner or for the place that hosts them.
Venice is a world-class city with a heritage for all of humanity, this is the truth. But then the world must really take care of her, without the assumption that belonging to everyone means belonging to no one. No one would dream of spraying graffiti on the wall of his living room, or climbing on the kitchen table to do his “business”. It is not clear why these behaviors become acceptable and even normal in a city with a delicate beauty and an infrastructure easily destroyed.